This week I am going to digress a little. I did explain that I love food so it was inevitable that it would come in sooner or later. But now I have a confession to make. Since I started this blog I am cooking less. Cooking and gardening have always been my therapy. I don’t go to the gym or play tennis to unwind, I just end up in the kitchen and enjoy putting together something from nothing. Or planning an extensive menu for a large bunch of people. That’s still not a problem; it’s the family dinners after a day’s work that are killing me. Although no one is actually going hungry there are certainly no deserts, unlike my mother, who used to provide a “sweet” every day. I was reminded of this fact this week as I contemplated what to do with the large amount of apples currently at my disposal.

I grew up with apple trees in the garden, big sour old fashioned cooking apples. (in order to preserve them right through the winter we used to wrap them in newspaper and place them in wooden boxes before placing them in a cool dark outdoor shed). Although a lot of things have changed in the intervening years, not least the fact that we wouldn’t dream of carrying out such an exercise, Autumn still remains to me to be All about Apples: sweet smelling cinnamon, buttery pastry, vanilla ice cream, you get the idea.

This year, a large amount of both cooking and eating apples have literally fallen into my lap. The cookers have come from a tree overhanging from my neighbours garden. The eating apples from a visiting friend from London who was staying in her uncles apple farm in North County Dublin. (supplier to Bulmer’s cider, no less) 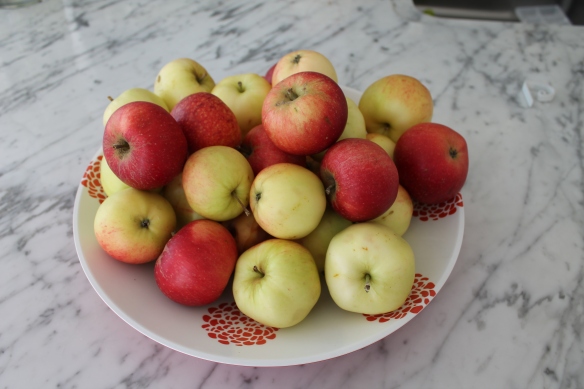 We have all become very spoiled in recent years. It used to be that we had red or green apples or whatever we were given. Now we all know our Pink Ladies from our Granny Smiths or Cox’s Pippins. In our house it seems to change each day and each week and I never have the correct ones in the house. However the apple farm apples proved deliciously sweet, perfect for school lunch boxes and also in their imperfection, each one being different. I just hope it won’t give a too-early taste for Bulmers!

When the cooking apples started to come in abundance a few weeks ago, my initial thoughts went along the lines of: will I make a pie? (need to make pastry, don’t have time now, will do at the weekend), or a crumble, (pretty fast, less precious, a good option), or a tart? (tart tatin, hard to beat).Then I reverted to my mother’s failsafe recipes. These were plucked from my memory, but as speedy, tasty options for a pile of apples I think they are good enough to share with you.

The first is Granny Cloonans Old Irish Apple Cake. This is basically a sponge mixture with a pile of chopped apples stuck into it. I thought perhaps it was just my own romantic memories of coming home from school to find this freshly made and then eaten warm that made it good, but having made it again I’ve concluded I do like it as an alternative to the pie, crumble, tart options that I have become accustomed to making recently.

The ingredients consist of 4oz margarine, 4oz sugar ,6 oz self raising flour ,2 eggs, 3 apples. (the recipe is in oz’s as it came from a long time ago!)

(ignore the gluten free flour, that’s just for our house)

First I mixed the sugar and the butter together well before adding the eggs.

Then the flour was folded in. 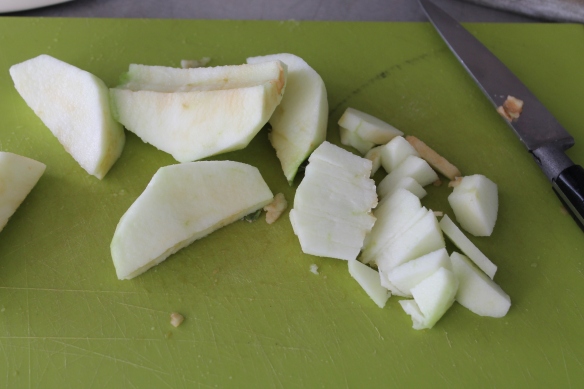 The apples were chopped into smallish pieces before being thrown into the mixture at the last minute.

It is perfect served warm with vanilla ice cream. 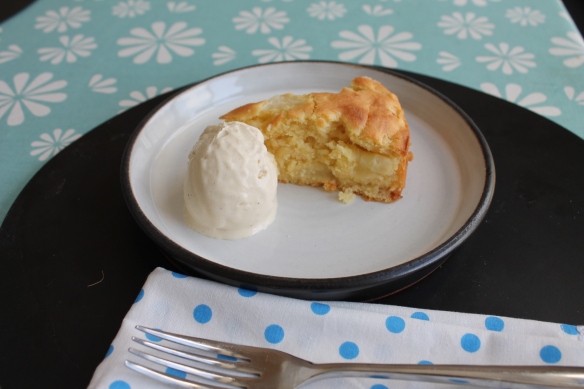 The second recipe is Granny Cloonans Baked apples which I have to confess I was less enamoured with as a child but now realise they really are good. Too much of a good thing as they say.

For about 4 large apples you need the following:

a handful of sultanas, 2 tablespoons of light muscovado sugar, 1 teaspoon cinnamon, a blob of butter per apple, 2 teaspoons of demerara sugar.

Preheat the oven on to 180C fan. Mix the sultanas, muscovado sugar and cinnamon together in a bowl.

Then core each apple. (turn them upside down to ensure you got it all!) 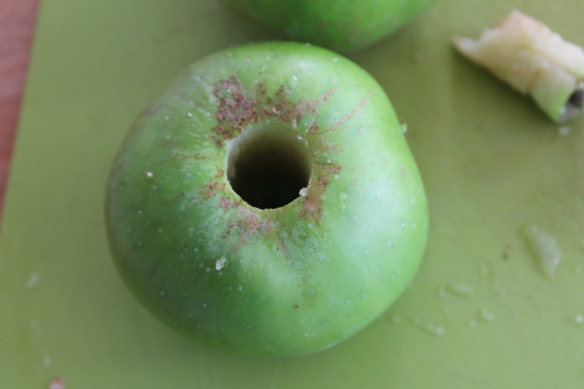 Stand the apples, side by side, on a tray or in a dish. Then put a little bit of the sultana mixture into each apple, until all the mixture is used up.

Add a blob of butter to the top of each and sprinkle with the demerara sugar. Then put them into the oven for 20 minutes or until the apples are cooked through and the kitchen smells of cinnamon, apple and caramelised butter… 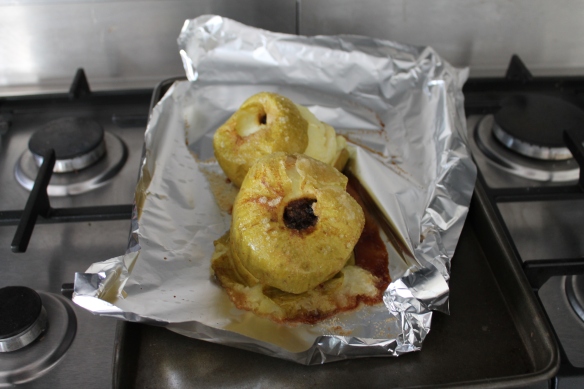 Despite this being a food posting I felt I couldn’t write about apples without mentioning something I came across a few months ago. It was in the context of doing the interior of a historic house. The family had been in possession of the house for a couple of generations and referred to one room (to be the future TV room) as “the apple room”. It was the room where the apples were stored over the winter each year back when the garden was full of apple trees. Anyway my suggestion was to fit out the niches on either side of the fireplace with a selection of apple crates as an interior feature. They tied in with the slightly retro and casual look that was right for the room.

Anyway I came across a company that makes and sells apple crates and so you too can get these if they take your fancy (or maybe you can persuade your local wholesaler to give you a few instead). Whilst usually used for commercial purposes in retail display I think they could make an attractive feature in a domestic setting also. 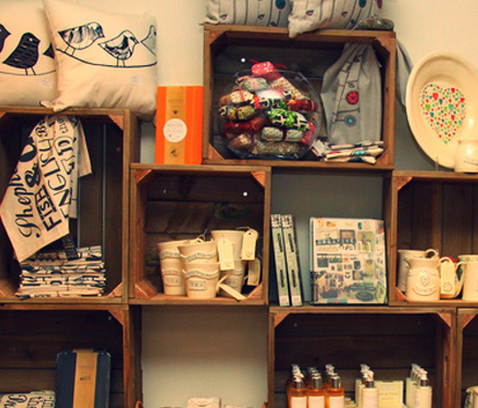 Anyway, that’s it for this week; if you do nothing else enjoy the wonderful colours of autumn embodied by the vibrant colours of a bowl of apples!

With thanks to Mark Bunting for the image of the North County Dublin apple farm in the slider above.