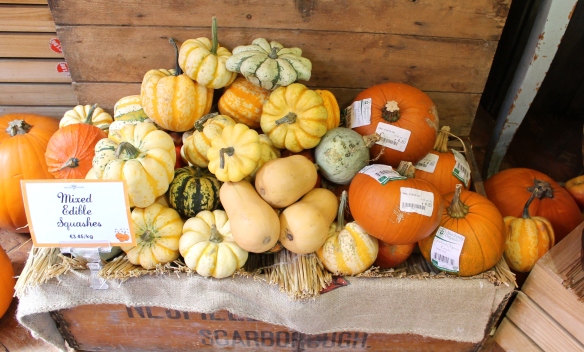 I know lots of countries have their own traditions and celebrations around this time of year. Here in Ireland we celebrate Halloween in a uniquely Irish historical context. The festival was first celebrated as a pagan festival back in 100 AD when the Celts marked the season of Halloween or ‘Samhain’, an old Irish word meaning the ‘end of Summer’. The belief was that this was a time of transition, when the veil between our world and the next came down, and the spirits of all who had died since the last Oíche Shamhna (Night of Samhain) moved on to the next life.

So now over 2,000 years later we wait till it gets dark, light lots of candles and try to create as spooky an atmosphere as possible but with the ultimate outcome being a bit of fun for all involved.

In recent years the variety in shape, size, colour and texture of autumnal vegetables available has increased hugely. It used to be that pumpkins were the only option however now we have gourds, squashes, spotty ones, stripy ones, lumpy warty ones as well as smooth ones! 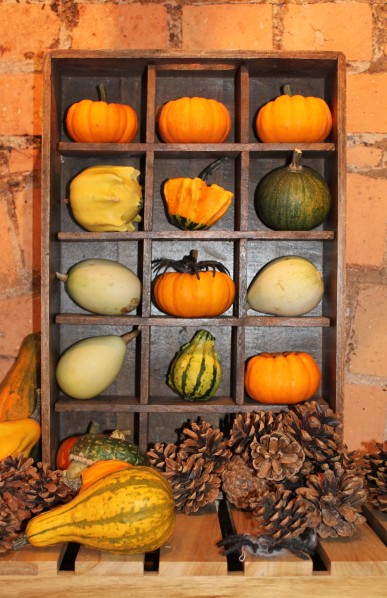 They can look fantastic simply arranged in a collection as seen here.

After what seemed like an eternity of wet summers when only meager pumpkin crops were produced, this year the weather was particularly kind and the prices of those available in the shops this year is reflected in this.

I spotted this enormous one in the Fallon and Byrne shop  in Dublin’s city centre. With the additional amounts and value available, the style and variety of pumpkin carving has taken on new heights. This in turn has lead more extensive uses for the delicious pulp. We have moved from soup to pie to risotto to bread and beyond. When it comes to the carving itself we can each decide whether we wish to spend hours creating carved specimens or just a quick fix.

As I don’t like to carve pumpkins too far in advance of Halloween (they go a bit soggy) these are just a few examples of the different types of carving I will be doing this year. They broadly fall into two categories: those where you cut the shapes right through the skin and those where you peel off the outer (dark orange) layer to reveal a shape which when lit from behind glows in the dark. Here’s an example of one of the latter.

Firstly cut off the bottom of the pumpkin 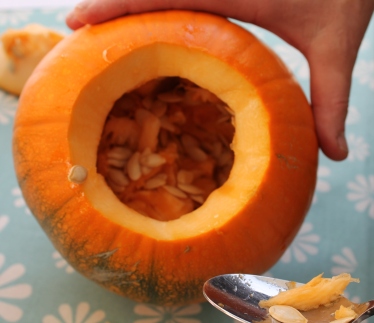 Then remove the seeds and retain to toast if desired. Then carve out the pulp and put aside for later cooking. 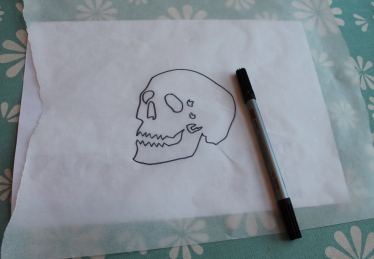 Next draw out a pattern onto the sheet of tracing paper. (or trace from a template or picture) 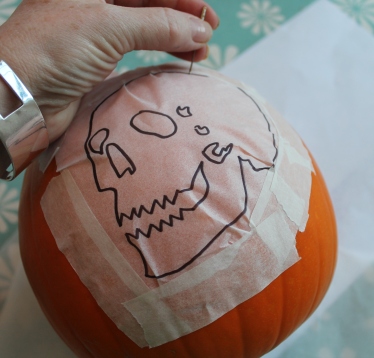 Then stick the tracing paper on to the pumpkin using masking tape. To transfer the image onto the skin you use a sharp point (craft knife or needle) to pin prick the outline of the picture onto the pumpkin. If you don’t have a lino cutter (available in all good craft shops) you could use a sharp peeling knife but it will be a lot more difficult. A lino cutter is an inexpensive investment, one which you will have year after year and one which makes the job at hand very easy to complete.

Next use the lino cutter to gently carve around the outline before moving inside the lines to bring out the desired shape. 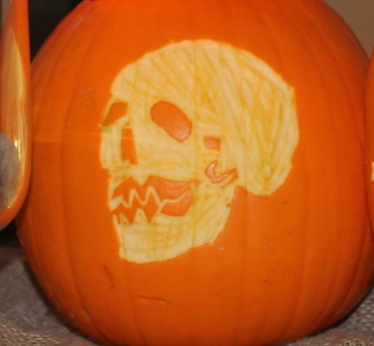 Ensure all the time only to remove the outer dark orange layer of skin. 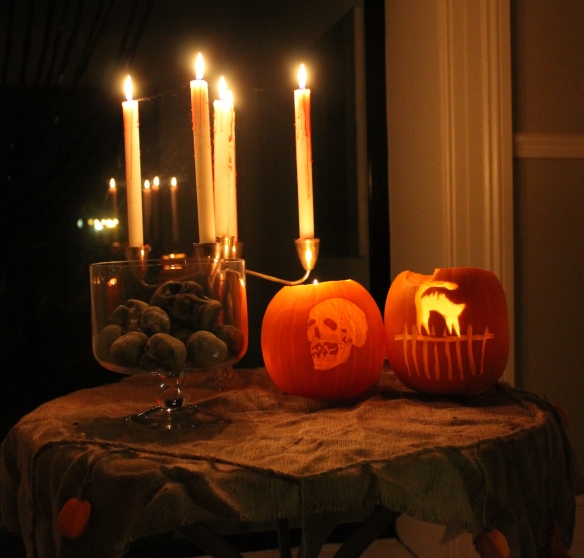 When lit from behind the shape gives a soft glow as seen above. The pumpkin to the right of the skull shows a combination of partial carving with lino cutter and complete removal to create voids.

The range of faces that can be created is endless as can seen in these images taken F&B last year.

Another method of creating impact is to turn the entire pumpkin into a lantern studded with white bulbs.

Here I used an apple corer to create a series of concentric circles after removing the pulp from the interior.

The end result is a diffuse light all over. I’m looking forward to experimenting with other patterns and implements (maybe a screw driver?) next week in time for the real event.

You might have noticed one of the photos above had a candelabra with a sinister edge (beside the bowl of skulls!). This “blood” was created using red candle wax dripped over plain white candles as seen here. 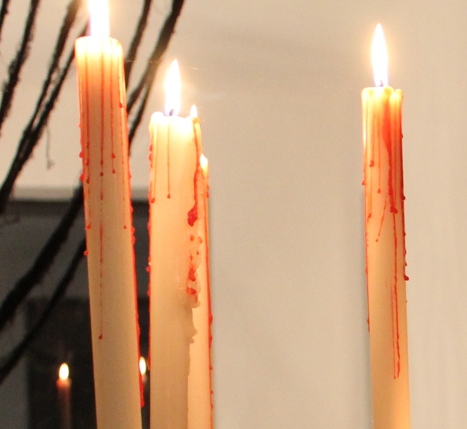 Finally, if all this carving and punching business seems like WAY too much trouble to go to but you would still like to do SOMETHING for the season then here is my quick fix solution.

Simply glue some googley eyes onto a selection of seasonal fruit and /or veg. Surround them with a few autumnal leaves for extra impact.

5 thoughts on “Halloween (Part II): We scare because we care!”