No blog posts for a while due to work constraints so forgive me if I blast these three in a row. If your desire is to lose pounds or kilos while you are in your kitchen then by all means put your fridge, hob, and sink as far away from each other as possible when planning it. If however, you do not want to run a half marathon every time you cook a meal, then opting for the efficient “work triangle” is the best option. You see, it really is the measure of kitchen efficiency, creating the ideal work flow. You simply trace a triangle between the fridge, hob and sink and you get the best working kitchen possible. Ideally the distance traveled  in total between the three should not exceed 6 meters (c.19’8”) (if you are being picky then an equilateral triangle probably works best, but it still works well if one or two sides are longer than the other.)

I have lived in quite a few houses and I have worked on dozens of others. Over the years I have built up a knowledge and understanding of what I believe to work in a kitchen. In my first house I inherited a kitchen. Layout wise it worked well. The units were galley in plan with the fridge, hob and sink forming a neat triangle, two on one side, one on the other. There was a problem with it however. It was brown, very brown. Taking it out was not an option. So I painted it blue and it was like a cloud had been lifted. Still the same old doors that weren’t quite ideal but nevertheless the dynamic of the room had changed for the better.

In my next house I put a new kitchen into an existing space. With not much space and not much money to play with, getting the basic layout right was the priority. Despite the small size I still managed to achieve the working triangle. (I know it doesn’t look like it from the photo below but believe me the fridge is to the right just out of the photo)

I stuck with simple shaker cupboards in cream but opted for splashes of colour on the walls and floor. The worktop was woodblock and was a pleasure to work with, requiring oiling once every couple of years to keep its appearance up. The floor was ceramic tiles in a variety of colours. Don’t be fooled by the apparently random appearance, the tiles are actually laid out in a carefully worked out “random” pattern!

In my next kitchen I was in a position to design the layout as I wanted it. The house was a new build so the services and electrical outlets were totally at my discretion. Here again I worked in the “ould triangle” but this time I had the scope to work in a large amount of storage with a walk in pantry room located behind it.

I opted for a straight run of units, an island and dining table all parallel to each other. Kitchen units come in standard 600mm width and the maximum space available for the units were 6 units length. The standard depth is also 600mm. In this instance I brought the units forward by 200mm, enabling the worktop to be 800mm deep and giving ample room for storage of hanging equipment, utensils and other items behind the normal working surface depth.

The units were full height at each end (like bookends) with worktop space in between. The two end units housed the ovens and integrated fridge respectively with the hob located in the centre of the worktop space between them. The units themselves were designed to take optimum advantage of a high ceiling with a row of high level cupboards for long term storage above the standard ones. Lighting was recessed into each level offering a mixture of atmospheric and task lighting.

A 900m deep island ran parallel to these units. The sink was located within this giving the ideal triangle with distances pretty much equal between the three items. The depth allowed a normal 600 deep cupboard on the working side and a half depth cupboard on the table side which accommodated everyday delph. The kicker of the island on the table side also contained a sweeper for the central vacuuming unit. The Vola tap offered a sculptural but not obtrusive element and a recess for cookbooks was created at the other end of the island.

One of the tricky things when designing a kitchen is trying to avoid too many “fashion” features that scream out the year that the kitchen was installed. White worked well for me in this instance. Every year Elle Decoration issues a “White issue” which demonstrates that in terms of timelessness, white never goes out of fashion, it just changes slightly with the season. The white handle less doors here offered an uncluttered look as well as being easy to clean. 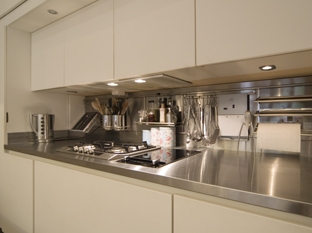 A number of features of this kitchen worked particularly well for me. The extractor hood was concealed behind the above counter units rather than making a feature of it. There are lots of things to consider when choosing the extractor that I can’t cover them all here (but may do it in a future blog post) from noise levels to cost to extraction quality.

A group of three units at right angles to the main run was designed to be lower and thus look more like a freestanding piece of furniture. This had a concealed dishwasher (to the right in the photo below, under the coffee machine) which was raised up by 300mm making it easier to empty/fill.

So, all in all, the message here is simple: get the big picture right to start with and follow this with an in-depth look at the detail until you have satisfied all your criteria for a working kitchen/ dining room.