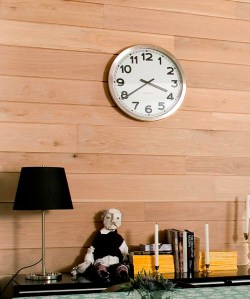 …and the evenings get brighter. I know there are lots of schools of thought for and against this, from the effect of the change on road safety to an increased risk of heart attack. (don’t ask me, I’m not a doctor!) From my own point of view I’ll take the longer, brighter evenings any time. Though looking out my window right now at the dark and gloomy sky you would never guess that Spring is allegedly here. In my house however, the clock won’t go forward. Or at least, not in my kitchen. You see this week it died. Of course I thought it was the battery but after replacing it I quickly discovered that it is officially not working. Kaput as they say. So it’s time (sorry!) for a new one and I thought I would share my shortlist of proposals with you.

First up is the Cuckoo clock designed by Mimi & Eve and produced by FabAllThings.

Given the name you might expect birds popping out at you but this is their very own take on the cuckoo clock. It’s made from high-quality cast acrylic with a dark blue, acrylic clockface with white acrylic hands. It measures approx. 36 cm diameter which make it a little smaller than my old one seen in the picture above which measures 50cm. I do like the colour and the fact that it is so different to my existing one, adding an element of colour to the room. (although obviously given my previous blog it won’t be against this oak wall for very long!) I have sourced this one from the Designist shop at 68 South Great Georges Street in Dublin but they also have an online shop, details below. At €42 for what is effectively a piece of functioning art, I think it represents great value.

Next up is the chrome and Putney clock from Newgate. 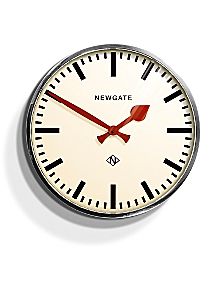 This is obviously in a similar style to my old one (which I have to confess I do like) but in an updated format: no numbers and with red hands which I think are attractive features. The size is good, being 45cm diameter as the one thing I don’t want is something too small. I have sourced this one from House of Fraser (Product code: 168828497) where it currently is reduced from €108 to €86.

If you are a fan of retro then this clock from Jones Clocks called the Red Kiss Kitchen Clock might appeal. The red fifties style cartoon with the immortal words ‘I kiss better than I cook!’ written next to it are quite fun. I sourced this one in Debenhams (Item No.3270142728).  It is available in stores and on line and is currently reduced from €28.00 to €22.40. Although I do like this one, at only 25cm diameter I reckon it’s too small for my kitchen. It might be good somewhere else though?

I’m not usually into Roman Numerals and certainly would think it unlikely that I would go for something with “Country” in the title but I do actually like this next clock.It’s got a round, domed face and is a good size for me at 45cm diameter. It’s called the Country Dome Wall clock and is available form Marks and Spencer (Product Code: T27/3885) at €60.

If you are a regular of this blog you will know that I like wall stickers. Brume have a good range of wall sticker clocks that make quite a change from the usual. If you don’t know how these work they couldn’t be simpler. You just put up the centre piece which contains the battery and clock mechanism, screw in the hands and then apply the coloured spots to the wall after that. (there is usually a template provided) This particular one is quite large being 97cm in diameter, so you would need to be sure that you have sufficient space for it to have its full dramatic effect. It costs £75 from Brume.

Not for me this time, but if you want something totally different and most likely more unique then another possibility is to pick up an antique clock at any of the many house contents auctions around the country. I don’t think I have yet to be at one where there isn’t at least one, if not a few, grandfather and other wonderful old clocks for sale. These can be really beautiful and you can pretty sure that no one else will have the same one, unlike the others above.

Quite often the tricky thing with these auction finds is the uncertainty of knowing whether it works or not. Well worry not as Kevin and Carol Chellar are specialists in fine clocks and have been repairing and selling clocks in their Dublin store Timepiece Antiques since 1983 and are willing and able to repair most antique clocks. They are members of the Irish Antique Dealers Association and a visit to their shop is a wonderful experience.

So, with time ticking by (really, really sorry)  I need to decide fast. You wouldn’t believe the number of times each morning we all look at the non-functioning clock and scream…