From reading this blog one would most definitely be forgiven for thinking that I only love to shop on line. Nothing could be further from the truth. It’s true that I have bought a large amount of things on line but I am also of the opinion that you simply cannot beat a real life shopping experience. So whether it’s shopping for food or for household items or presents I think we should all savour the experience and reward our shopkeepers who are keeping our towns and villages alive. So, from now on I will be doing a regular blog featuring places I enjoy shopping. You will have to forgive me as I live in Dublin and so will feature more from the Pale than elsewhere but as I travel around from time to time I promise to share any great finds I make.

This week I thought I would kick things off with a visit to the Victorian fruit and vegetable market in Dublin’s north inner city. This is a large covered market located between the Four Courts and Capel Street in Dublin’s city centre. It is a 6,000 sq m building which was purpose built to house the Dublin Corporation wholesale markets in the late nineteenth century. According to Christine Casey writing in her book The Buildings of Ireland, it was designed by Parke Neville, the City engineer but was carried out by his successor Spencer Harty after Neville’s death. It is still home to wholesalers today but the public are not excluded by any means. If you have never been there then make it your business to do so, especially as it is to be redeveloped by Dublin City Council next year.

A typical (grey) morning In Dublin

I usually only go a couple of times a year but when I do, I always make it ridiculously early in the morning. It opens at 5 am and there is no better feeling than to go through the deserted streets of Dublin very early in the morning to arrive and find the streets surrounding the market and the market itself bustling with activity. I accept it is complete nonsense that I go at this early hour as the market stays open until lunchtime each day. There are several aspects of doing this trip that I love.

The beauty of the buildings themselves.

The great selection of flowers, vegetables and flowers available.

The characters, the banter and the variety of the homes away from home of the market stall owners.

So, first to the building. There are eight bays of structural steel work holding up the roof and this is enclosed by arcaded perimeter walls of red and yellow brick with terracotta detailing a testament to craftsmanship. Formal entrances are located on Mary’s Lane and Arran Street West both of which have stone Corinthian columns flanking the entrance.

Figures of Justice and Fair Trade are located above the Mary’s Lane entrance above the elaborate Corinthian columns.

The use of terracotta in the building (which was cheaper than stonework) allowed for elaborate friezes and three dimensional decorative detailing. 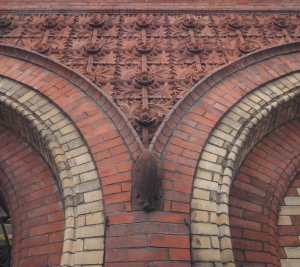 In between each brick arch is terracotta stop each depicting a different fish, fruit or vegetable. Here, you can make out a 3D fish! 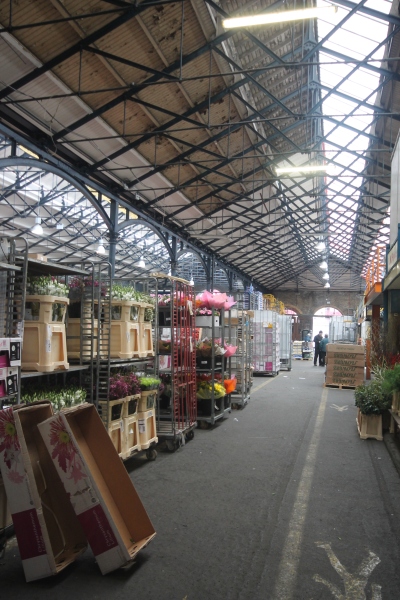 These are lit from above with north light glazing which illuminates the produce for sale.

The market is made up of individual traders each specialising in their own variety of produce.

From differing varieties of potatoes to multiple choice of onion types… 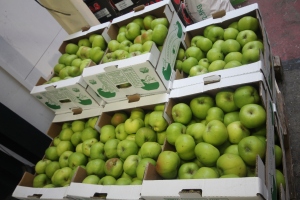 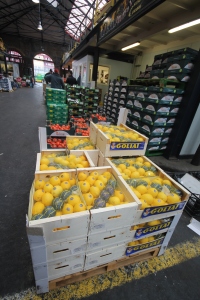 Joseph M. Duffy & Sons have been selling flowers and plants in Dublin’s Smithfield since 1900. They are suppliers of beautiful flowers and plants from around the world, sourcing both popular varieties as well as the most exotic flowers. 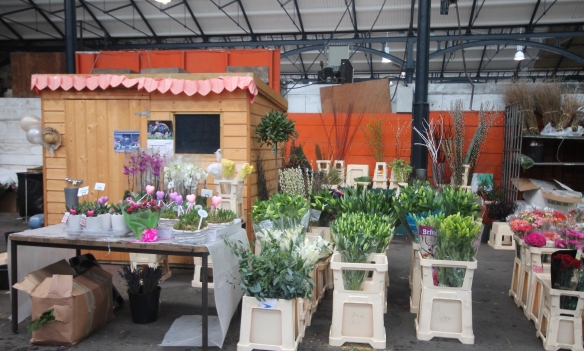 Each of the traders have their own on site office located within their defined space.

Some of these are more elaborate than others such as this one with its antique writing desk outside and an enclosed office behind the blue wall.

This office is decorated with personal memorabilia handed down from generation to generation. 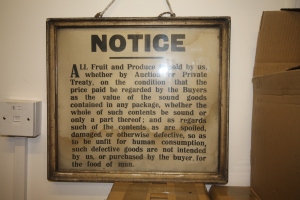 The owner explained to me that this poster came from his great grandfather.

So there you have it, a walk-through of the Dublin enclosed markets as they are today. The council is expected to make public in the next few weeks their plans for the redevelopment of the entire area. These are said to include plans for a new retail area where butchers, bakers, cheesemongers and fishmongers will all join the existing market people. It is also proposed to have indoor and outdoor cafes in the buildings bordering the market. Whilst that all sounds very laudable in terms of the improvement of the area in general it’s hard not to wonder how the current traders will fit in and where they will be left in the overall of scheme of things if the new plans go ahead.

There is parking available in the large car park next door to the market or you can avail of the Luas red line stop behind the Four Courts just off Capel Street.